I have large old exterior projects in Dialux 4.13 and want to transfer them for further work in Evo.
How to transfer them into Evo (intermediate formats or some other way)?
Lux ex machina / UA
Top

In case you would like to import a whole DIALux 4 project into evo, then you can do it just for DIALux 4 indoor projects. It is not possible to import exterior scenes of DIALux 4 into evo.

Furthermore the import feature works only with our 32-bit version of evo because DIALux 4 is also a 32-bit application. It is also necessary that our DIALux 4.12 software has to be installed parallel on the computer.
It doesn’t matter if you had a 32-bit or 64-bit processor.

Unfortunately it is not possible to install both evo versions 32- and 64-bit parallel on one computer.

Therefore you have to uninstall the 64-bit version and install the 32-bit version afterwards. The setup dialog window will show you both selections. The screenshot is in German language as of our operating system, but the 32-bit check box will be on the same position in the English setup. 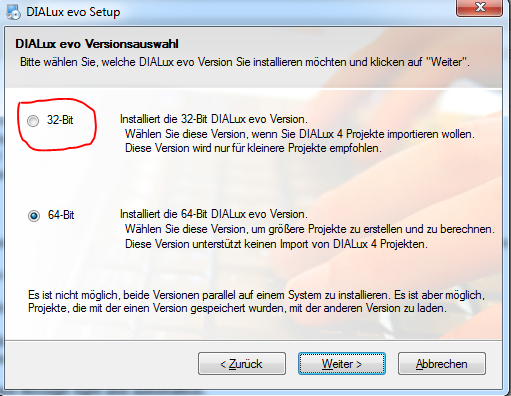 It's not even an option to reinstall Evo in 32 bit version.
I thought you can transfer via STF or your own format.
You should really think about it, especially because you're discontinuing 4.13 version.
For example, create specific IMPORT-from-old-format option in Evo.
Lux ex machina / UA
Top

Yes, of course - you can also use the interface of STF file format. You could export the DIALux 4 project via STF and import this STF file directly in the evo version.

Users browsing this forum: No registered users and 10 guests