Hi dears. Hope everything goes well with you,

I have used the Dialux evo 9.2 for a road project lighting. I have imported the CAD file of a cross road and I have considered some calculation surfaces on the streets of mentioned intersection. I would like to get the green check of valuation field parameters (Lm, Uo, Ui, Ti, EIR) on these calculation surfaces. Please let me know a method for assigning the suitable street class to the streets of mentioned intersection and also a method for achieving the green check of Lm, Uo, Ui, Ti, EIR. Please note that I can’t use the street lighting mode of Dialux evo because of special situation of this intersection

. Could you please help me in this regard?
Top

As we integrated in DIALux the European norm EN 13201, which defines the calculation of roadways, this norm only allows straight roads. So, if you want to realise a lighting planning according to the norm, you are restricted to the defined parameters.

DIALux users often expressed their wish to use “real” situations for street lighting planning. That is not possible in a design according to EN 13201. The “standard street” does not encompass curves or the possibility of changing single luminaire technical values or positions.

Here is a link of an evo tutorial how you can construct a crossroad in an outdoor project:

Unfortunately, you can’t insert a street evaluation field in our DIALux evo software. And please keep in mind that it is not possible to get the results for a street observer, nor the Lm, Uo, Ul, SR and TI in the outdoor scene. These results are only calculated in a real street lighting planning according to the norm EN13201.

Hi,
Thanks for your kind reply.

I’d like to arise my problem in more details and I am sure you and your supportive team would find a solution for my problem. We have a curvy road with the mountains around it. We can’t use the lighting system along all the route because of high possibility of falling rocks of mountains and we have to use the lighting system just in important intersections along the route with lighting towers. I am afraid my lighting design make glare for the drivers (because the route has no light totally and the vision is so limited because of the mountains around the crossroads. So, lighting of only the cross roads of this route can make glare). So, the green check of TI parameter is so urgent for this project. Let me inform you I have used the GR (glare rating) in my calculation surfaces in my project and I have got the green check of GR. Please let me know whether the green check of GR is equivalent with green check of TI? In other words, when the green result has been obtained for GR, can I conclude that the green result has been obtained for TI checking as well? Thanks!
Top

For road lighting design, DIALux 4 and evo carry out the glare calculation according the TI (Threshold Increment) system. The TI calculation is implemented in DIALux according to the standard of EN13201(3) 8.5:

The observer will be automatically placed in the middle of the lane 2.75*(H-1.5) in front of the valuation field.
After that the observer is moved lengthwise in steps which conform to the x-distance of the calculation points.
The TI value is calculated for each observer position. DIALux reads out the maximum value as the TI value. This calculation could not be verified from the DIALux user. This means that no start position for the TI calculation can be defined.

The street valuation field includes an observer, which is always 60m in front of the valuation field in the middle of the respective roadway, at a height of 1,5m above the ground. This is according to the norm EN13201.
Lve is the equivalent veiling luminance of the environment in cd/m2. Starting from the assumption that the reflection of the environment occurs completely diffuse, the equivalent veiling luminance can be calculated as Lve = 0,035 x Rho x Eav x Pi -1. Rho is the average reflectance and Ehav the average horizontal illuminance of the area.
This is the German chapter of the norm:


We calculate for Rho the area-weighted average reflectance of all horizontal floor elements and for Ehav the average area-weighted illumination of all horizontal floor elements.
Vertical surfaces are not considered.
The calculation grid points depends on the definition in the standard EN13201-3. Below you will find an abstract of this chapter description the position of calculation points. 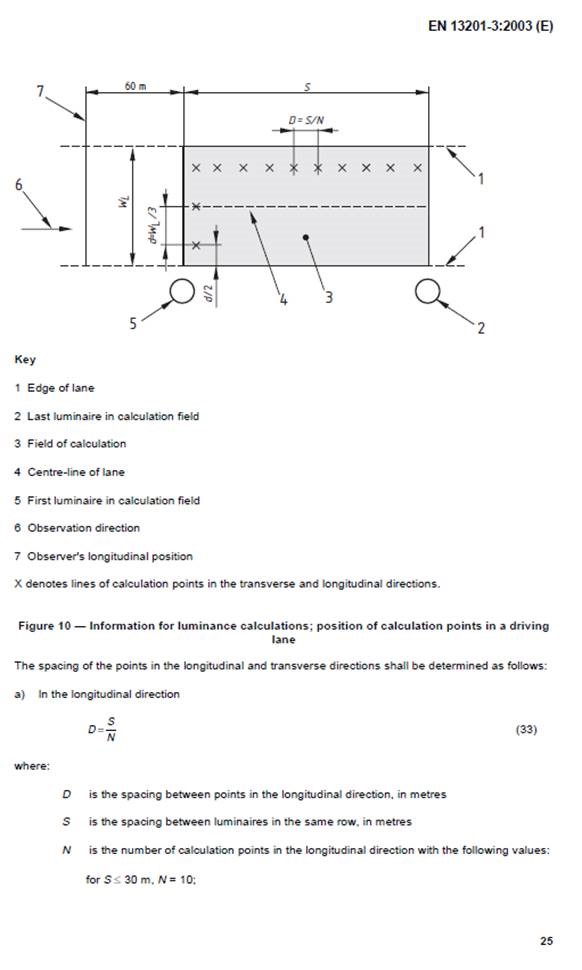 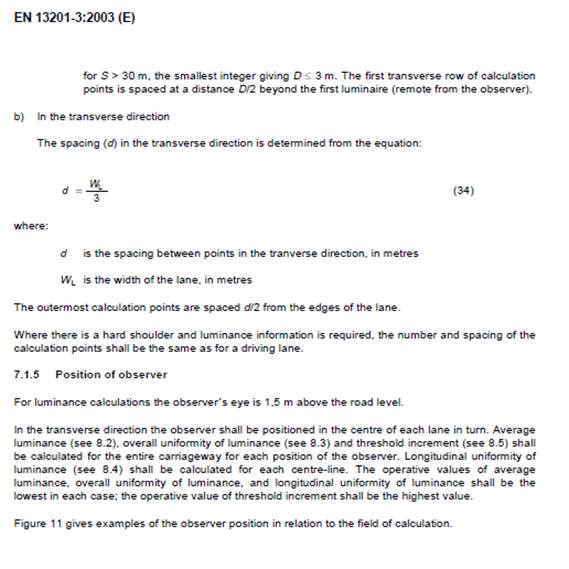 The equation from the standard EN13201-3:2003 describes in which range a TI value is determined. 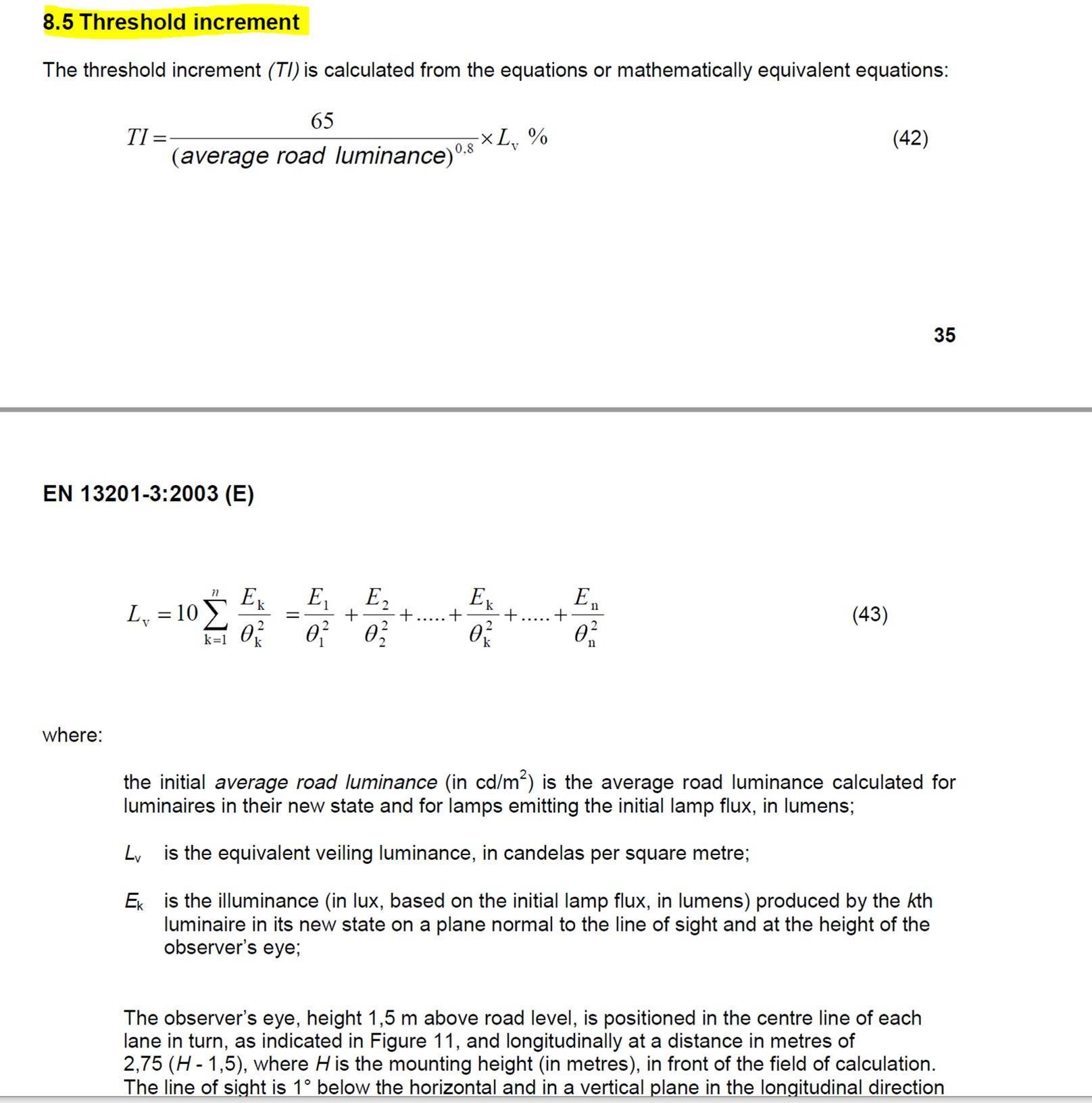 And now some information about the GR glare calculation:

The EN 12464 part 2 standard stipulates that glare must also be avoided for outdoor workplaces. To ensure this, limit values for glare are specified depending on the workplace or activity. The glare rating system (GR) is described in CIE publication 112:1994. In addition to luminaire luminance levels, the essential criterion for calculating glare is the equivalent veiling luminance of the surroundings. At this point, EN12464-2 makes a different simplification compared to the CIE publication.
DIALux offers you the option of selecting whether you want to use the simplified method of the EN or the complete method of the CIE. With the simplified method, the equivalent veiling luminance of the environment (Lve) is calculated according to Lve=0.035 x r x Ehav x p-1 where r is the average reflectance and Ehav the average illuminance of the "area". Unfortunately, the term "area" is not defined in more detail in the EN. Therefore, in DIALux all floor elements are used as "area".

When calculating according to CIE publication 112:1994, the correct equivalent veiling luminance of the surroundings is calculated. Here, all objects in the observer's field of view are taken into account. The environment is divided into small sub-areas (as in the case of illuminance calculation). With the formula, the equivalent veil luminance of the surroundings is obtained, n stands for the individual partial areas. Of course, this calculation is more accurate but also more time-consuming.

To calculate GR values, the user can use the GR observer in DIALux. This can be placed like any other calculation point. A special feature of the GR observer is that the tilt angle, start angle, end angle and step size can be set. The tilt angle indicates the viewing direction to the horizontal. The start and end angles define the vertical viewing angle of the observer. 0° is the direction along the positive X-axis, the counting direction is positive counterclockwise. Step width can be used to define the individual viewing directions between the start and end angles. 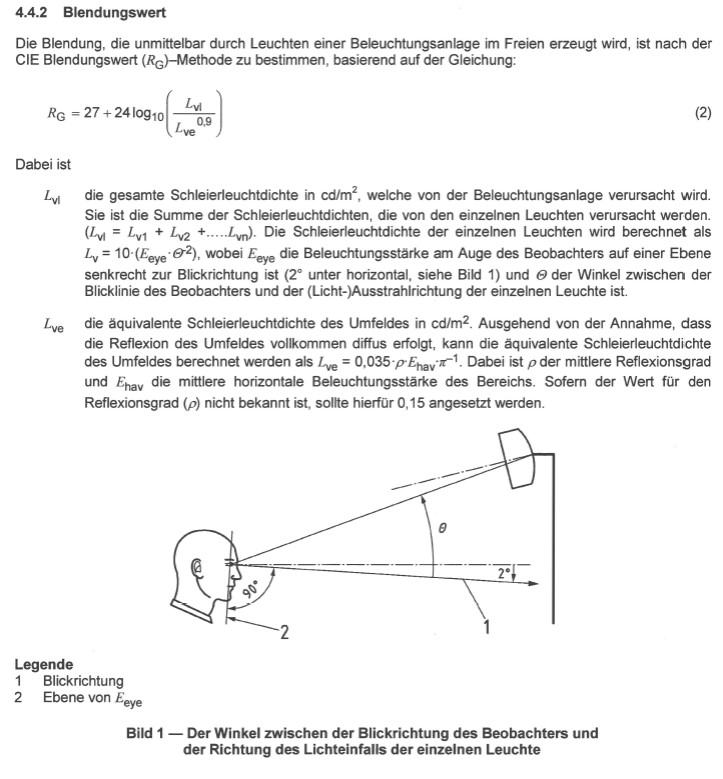 2) GR calculation according to CIE 112: Here, the background luminance is determined as a function of the viewing direction. Since we have narrow-beam spots, the veil luminance Lvl = 10 Eeye / Θ2 (see EN12464) generated by a luminaire is extremely low for any observer, since almost no direct light Eeye reaches the observer's eye.
You can achieve glare values >10 by having the observers look upwards, e.g. take 45° for the tilt angle (instead of -2°).

Users browsing this forum: No registered users and 3 guests