Hello,
I would like to know the meaning of the term ULR (Upward Light Ratio). This term appears on the page 'Exterior Scene 1 / Planning data' on the output of the calculation report. The value is usually in percentages. I request someone to explain to me the meaning of this term and the consequences this has on the illumination levels.
Thank you.
Top

The ULR (Upward Light Ratio) value is the percentage of luminaire flux of a luminaire or a lighting installation that is emitted above the horizontal, where all luminaires are considered in their real position in the installation. Sky glow limitations depend on the environmental zone of the lighting installation. The standard defines four environmental zone categories from E1 to E4. E1 category is used for intrinsically dark landscapes like national parks or areas of outstanding natural beauty. E4 category is used for high district brightness areas like city centers. Sky glow limitations reach from 0% to 25%. 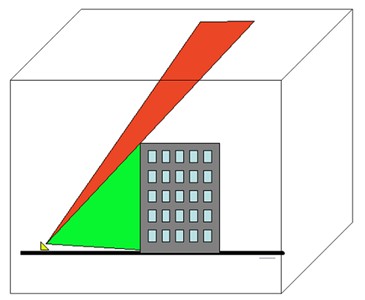 
DIALux states the ULR value on the “Planning data” output page for exterior scenes. DIALux considers only luminaire flux that goes directly into the sky. Luminaire flux above the horizontal, that is both used for lighting of vertical structures such as facades, and is restricted to these structures, will not be considered.

ULR calculation:
- Only the light that reaches DIRECTLY (without reflection) the sky
- The “sky” is a box with 5 calculation grids around the scene
- The ULR is the light reaching the shoe box (E = Fi / m²) in relation to the total flux

Users browsing this forum: No registered users and 1 guest